For centuries, the art of falconry has been a prestigious tradition within Arab society. Today most of these formidable predators come from Spain, which has become the world’s top exporter.

In upper-class Gulf society, these swift-flighted hunters are worth a fortune, with buyers sometimes shelling out tens of thousands of euros per bird.

“The feathers must be completely whole,” says Juan Antonio Sanchez, proudly showing off one of his falcons which is about to be shipped to Qatar.

Every year, around 150 of them leave the breeding facility that he runs with his partner Beatriz Dominguez in Fuentespina in the arid Castille region, some 150 kilometres (90 miles) north of Madrid.

Most are headed for the Middle East where rich amateurs buy them for racing or hunting.

A breeder for more than 15 years, Sanchez and others helped turn Spain into the world’s number one exporter of falcons in 2018, according to figures from the Convention on International Trade in Endangered Species (CITES).

Last year, Spain exported some 2,800 specimens, almost all of them to Gulf countries, easily passing the 2,500 sold by the United Kingdom. 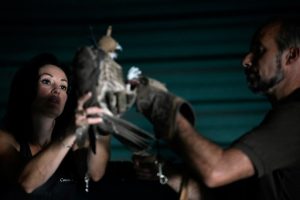 With 52 falcons due to be flown out the next day, Sanchez and Dominguez are making last-minute preparations for their journey.

With the help of two employees and their seven-year-old daughter, they take the birds out of the enclosures where they have been raised for the past three to five months, far from prying eyes.

After securing the falcons’ claws with leather straps, they cover their eyes, then place them on perches where they will stay for the night. The silence and their inability to see have a calming effect, reducing stress levels before the journey.

The next day they will be loaded onto a lorry then transported to Madrid airport where, after passing veterinary checks and other formalities, they will be put on a plane to Qatar.

“I’m always waiting for news, so I ring them up and ask: have they got there yet, are they OK? Give them something to eat and drink, things like that,” smiles Sanchez, 49. 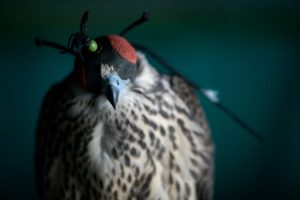 On the perches are a stunning array of hybrids, these particular ones produced by crossing the gyr, the biggest and most elegant species of falcon, with the peregrine, which is the fastest.

With their long, tapered wings, falcons have exceptional flight capabilities. The peregrine is known as the world’s fastest animal, with diving speeds of up to 300 kph (186 mph).

“For me, a peregrine is perfection,” Dominguez enthuses.

“There is not one part of their bodies that is not designed to be like a bullet,” she whispers in the darkness of the corridors leading to the breeding enclosures.

According to Manuel Diego Pareja-Obregon, who heads the Spanish Falconry Association (AECCA), buyers from the Gulf tend to pay about 2,000 euros per falcon.

But for specimens from a handful of breeding facilities known for supplying Gulf royalty and their families, the price tends to be in the tens of thousands, says Javier Ceballos, a Spanish falconry expert.

Such birds are raised in customised air-conditioned facilities where their trainers come and select the best specimens.

“They don’t allow even one falcon with a broken feather back in, and if it happens, there’s a sharp reprimand for the falconer who is handling them.”

Species that live in the wild in Spain, which are smaller and have brown plumage, are largely overlooked, he says.

“The few that were sold were for children!” 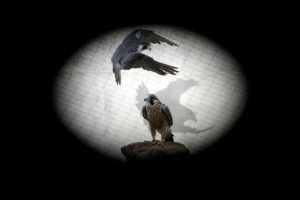 Spain counts around 400 breeders, many of whom started during the financial crisis by studying the art of breeding online in order to make a living off of their passion, explains Pareja-Obregon.

Initially working with falcons in pest control at airports and public buildings, Sanchez ended up by raising his own raptors in a business which brings in about 60 percent of his income.

Spain has an age-old tradition of falconry dating back to the Middle Ages when the Visigoths and the Arabs introduced it to the region.

Today, hunting with raptors, which has been recognised on UNESCO’s list of intangible cultural heritage, is a sport practised by just over 3,000 people in Spain, making it the European country where falconry is most deeply rooted.

But for breeders, Spain has a key advantage: its hot, dry climate allows the gyrfalcons — which normally live in higher, colder latitudes — to become acclimatised to the hotter temperatures they will experience in the Gulf.

“When the falcons arrive in Qatar from Spain, they don’t feel the change in climate quite so much,” says Salim al-Humaidi, a Qatari national who buys falcons from across Europe every year. “That’s why I prefer falcons from Spain.”

In the Middle East, authentic hunts which have been practised for centuries by nomadic tribes have become increasingly rare. 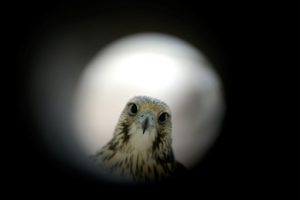 These days, the wild quarry the falcons would have hunted such as the houbara bustard — a rare desert bird whose meat is prized as an aphrodisiac — is now almost extinct.

Today such birds of prey are used more for racing — against the clock or in pursuit of a remote-controlled robot “prey” — drawing criticism from purists.

Although possessing a falcon is an ostentatious sign of wealth, the owners often lose interest in an individual bird after about a year, heading back to the market in search of a new champion.

And this has provided a lucrative source of income for Spanish breeders that is showing little sign of letting up.

Published by ” The local “